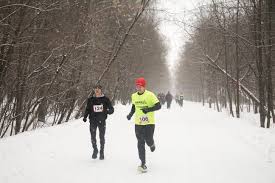 By the first marathon, it was a half marathon, and I changed it to a 10km run at the end.

I had gotten roped into doing a marathon through work. I have a co-worker that likes to volunteer everyone into anything that she thinks they would be good at. Which is appreciated on some levels, but sometimes it is a bit much. I have never done a Marathon or any race that you must sign up for; I guess I did a bike-a-thon for M.S once, but that was it. Running is another thing entirely.

I have been an active runner for about four years, and I enjoy running (I know, one of those people) recreationally. I love the high you get from it, and I can  put on some tunes and just go. I try and run year-round, but I am not religious about it, and I do not aim for a pace or keep any crazy stats on my progress. I just love to run. Now running with a goal is something much different, not too mention a half marathon in the winter is no cake walk. I did not know what I signed up for!

Now when I signed up I had this idea that it was going to be a team thing and we were going to be doing this as a work thing, there was going to be a Facebook group, we were going to train together and help keep each other motivated, but that soon evaporated. The group was never updated, and I never got emails from anybody at work. I came down with a could for a couple of weeks, and it got scary cold for awhile too which complicated training. I also have poorly aligned ankle bones which can rub on the tendons and cause them to swell up making it hard to walk lead alone run. I have orthopaedics, but they have been falling apart, and I have been lazy at getting them replaced. All these things on top of my non-competitive nature made for lousy training. Then I finally did the math and converted miles to kilometres and realized how far a half marathon was (13.1 miles miles = 21.1 kilometers). Yeesh! I finally switched my bib to a 10 km and buckled down to see if I could manage that.

When the race day came around, I felt confident, that at least I would complete it. Waking up at 6am and having to drive across the city to be ready for a 7:30 race start wasn’t my favourite. I also only saw 2 of a supposed 6 people from my work, so much for the team. The race went well, I stayed warm and just set my goal to stay with the person in front of me until I thought I could pass them. I didn’t have to slow down or walk until the way back, which I was happy with. Everybody was friendly and cheerful, although it’s disheartening when you are going along huffing and puffing only to be passed by a couple who are having a casual conversation about their son’s parent-teacher meeting or what they need to pick up as Costco this weekend. 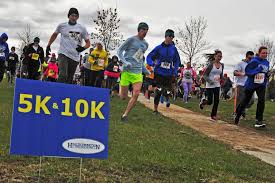 I learned a lot about myself, and I felt accomplished for having done it. I think I would do another run like that again and maybe do the half marathon next. I know that I can do it, but I would need to train, for real. I don’t think I could ever be competitive about running but knowing that I can do a long distance would be fun.